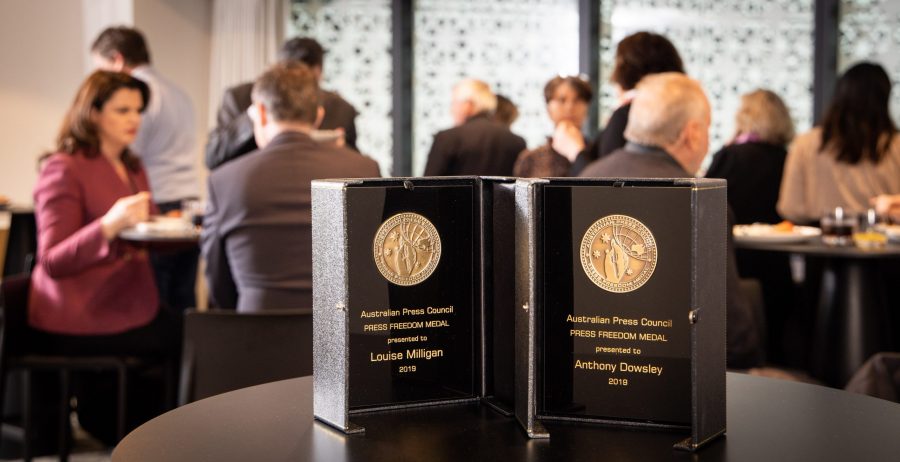 The Australian Press Council has awarded Press Freedom Medals to two outstanding individuals for their major contributions to furthering the causes of free speech and freedom of the press.

The awards were made at a luncheon hosted by the Australian Press Council in Sydney today.

“The winners of this year’s Press Freedom Medal are two outstanding journalists whose work exhibits integrity, courage and a spirited pursuit of the truth,” said Neville Stevens, Chair, Australian Press Council. “Their reporting demonstrates and reinforces the democratic right to freedom of expression for all Australian citizens and illuminates the importance of a free and independent print and digital media.”

“Louise Milligan’s dogged investigation into criminal allegations against George Pell has had a powerful impact. In her reporting more generally, a focus on voices which may otherwise not be heard is a constant feature. Anthony Dowsley’s five-year ‘Lawyer X’ investigation led to a Royal Commission which is still underway, while his reporting on the Moorabin police murders opened up an Independent Broad-based Anti-corruption Commission (IBAC) probe.”

On receiving her award, Milligan said: “I am honoured and humbled to accept this award in a year in which Australian journalists have been targeted simply for telling important stories that are in the national interest. Now, more than ever, we need to strengthen the legislative safeguards to protect journalists’ ability to protect our sources and to hold power to account. Because that is at the core of what we do.”

Dowsley said: “As an industry it has been heartening to see journalists banding together to defend ourselves against authorities intending to intimidate and obstruct press freedom this year. Journalists should not have to work under the threat of prosecution. Public interest reporting should never be an offence.”

The Press Council has awarded the Press Freedom Medal intermittently since 1999, but the honour was reserved for people affiliated with the organisation. The Council decided in 2016 to revitalise the award and open it up to people who, through their work as journalists, legal practitioners, community activists or advocates, help ensure the preservation of free speech, press freedom and open and transparent government.

Past winners of the Press Freedom Medal:

2018 – Peter Greste, former foreign correspondent, vocal proponent of press freedom and now Professor of Journalism and Communications at the University of Queensland; Gerard Ryle, Director of the International Consortium of Investigative Journalists.

View All
Back to top